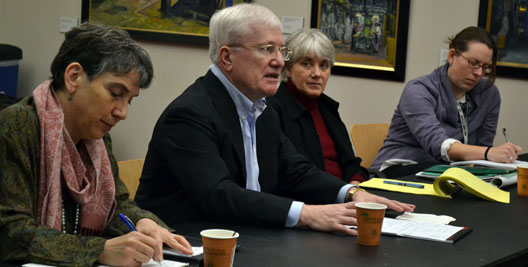 The Clinical and Translational Science Institute of Southeast Wisconsin is comprised of eight partnering institutions: the Medical College of Wisconsin, the BloodCenter of Wisconsin (BCW), Children’s Hospital of Wisconsin (CHW), Froedtert Hospital (FH), Marquette University (MU), Milwaukee School of Engineering (MSOE), University of Wisconsin-Milwaukee (UWM), and Zablocki VA Medical Center (ZVAMC).  Up until CTSI was formed, there was not a systematized way to identify studies that affected two or more these institutions; therefore requests for single IRB reviews on behalf of several institutions were cumbersome and rare.  The process had to be reinvented for every study and there was reluctance on part of some of the institutions to participate because it was complicated.

A Master Reliance Agreement is a memorandum of understanding between two or more institutions engaged in research, expressing their intent to coordinate regulatory review of shared research activities.  These agreements are vehicles for explicitly stating how coordinated reviews will be managed, from defining what studies are eligible for a coordinated IRB review to stating the procedures for keeping all affected institutions promptly informed about regulatory noncompliance and other serious problems. Institutions with a Master Reliance Agreement are more apt to provide more effective and efficient oversight of multi-site human subjects research protocols as well as reduced costs and duplication of efforts among the institutions and investigators.

The CTSI Regulatory Knowledge and Research Ethics Program promotes protection of human subjects and facilitates regulatory compliance while decreasing redundant and burdensome barriers to the conduct of research.  At the Regulatory Knowledge and Research Ethics Program monthly meetings, regulatory and compliance representatives from each of the eight institutions became familiar with each other and with the perspectives of each individual institution.  This familiarity helped them to develop a collective solution to coordinate regulatory review, lift a burden from investigators, and reduce costs and duplication.  This collaboration led to the execution of an eight institution Master Reliance Agreement among the Partnering Institutions of the Clinical and Translational Science Institute of Southeast Wisconsin in December 2011.

When asked if there was an increase in the number of multi-site studies with the eight institution Master Reliance Agreement in place, Dr. David Clark, Assistant Dean for Clinical Research at the Medical College of Wisconsin responded, “Research here grows steadily from year to year. We do expect that the volume of studies will really mushroom with the CTSI partnership and the focus. So, whether we’ve begun to simplify the reviews for huge growth or whether that’s around the corner, that’s part of our strategy – fewer IRB Reviews as the volume gets larger and larger. That’s certainly going to happen.”  The Master Reliance Agreement is a durable long term agreement that can cover a lot of studies and it is expected that the numbers of ceded IRB reviews will accelerate soon.  There has already been a 212% increase in IRB reviews ceded from partner to MCW and a 290% increase in IRB reviews ceded from MCW to partners.

One of the biggest accomplishments of the Regulatory Knowledge and Research Ethics Program in 2011 was overhauling the entire IRB application to include all the necessary questions in clear and specific language.  The purpose of this is so that when the application came to the committee for review, it could be reviewed at that time rather than having to request more information from the investigator.  It now allows the investigator to know exactly what to provide in their application so the IRB can be satisfied.  It is expected that the percentage of protocols approved in the first time they come up for review will increase from the 50% or so it is now to a much higher number.  Statistics will be collected in the first half of 2012 and analyzed to verify the changes to application have worked as intended.

The MCW Institutional Review Boards (IRBs) consist of representatives from each of the eight CTSI partnering institutions, non-affiliates, and non-scientists.  The non-affiliates are people who have no ties with either MCW or Froedtert. The non-scientists are people who are not scientists, physicians, or anyone holding an advanced degree such as nurses or social workers.  The requirements to be an IRB member are sitting in on two -2 hour meetings a month at the medical center, plus some homework on the kind of research done here and an interest in controlling risks involved in the studies to make sure the consent forms are written clearly so that study participants understand what will be done in the study and all the potential risks. Anyone interested in joining the MCW IRB, please contact Dr. David Clark at dclark@mcw.edu or (414)955-8422.