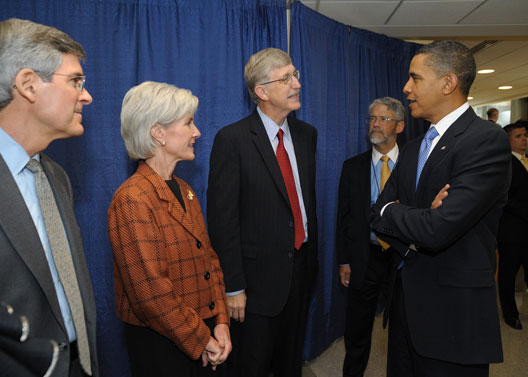 In an effort to speed the movement of discoveries from the lab to the patients, the National Center for Advancing Translational Sciences (NCATS) has been established by the National Institutes of Health. NCATS will become the parent program of the CTSA (Clinical and Translational Science Awards) which fund a national consortium of 60 medical research institutions working together to improve the way clinical and translational research is conducted nationwide. This was made possible when president Obama signed the fiscal year 2012 spending bill approved by Congress. The bill included the establishment of the Center with a budget of $575 million. Preclinical and clinical translational science capabilities within the NIH are being reorganized into an integrated scientific enterprise and the Center will be comprised of seven programs including the Clinical and Translational Science Awards (CTSA). Funds from programs formerly located in the NIH Office of the Director, National Genome Research Institute, and National Center for Research Resources have been reallocated to provide the primary funding for the Center.  Until a director is recruited, the Center will be under the leadership of Acting Director Thomas R. Insel, M.D., and Acting Deputy Director Kathy Hudson, PhD.  Read the press release.